The Classic Room At The Borgata – Part II

We pick back on our review of the Borgata where we left off, right as I arrived on the muted but playful carpet of the 31st floor hallway and put my key into the slot. As I heard the familiar bleep bloop and the lock click, I was remembering all that I had seen so far: the quality of the Borgata, the Vegas megaresort with an east coast twist vibe, the action packed floor compared to the relatively quiet boardwalk on a cold Atlantic City night. So far this hadn’t been my expectation, and what was beyond the door was just exactly what has solidified the Borgata’s winning streak as the king of Atlantic City casinos. Entering the hallway, with floor to ceiling glass in the distance, the depth and size of the room, on par with most high end Vegas resorts, becomes readily apparent. The muted brown carpet gives way to gray tones with pink patterns and the room is flooded with natural light. Inside the door is nothing fancy, a light switch and a traditional DND sign on the door. Turning around, to the left is the door to the bathroom, to the right, a large mirror as has become standard as the go to accessory for hotel entry halls. It’s framed in white and sets a tone against the darker wall paper behind it, more subtle contrast with a pop in finish that’s the signature of the Borgata’s design scheme. Just beyond the bathroom door is a double doored closet. Inside is the typical safe, ironing board and iron, hangers and a suitcase rack. Nothing special, and sadly no robes to be seen, maybe a mistake, but if not it would be a welcomed addition. Before we get to the room proper, lets go over the bathroom, which much like my bath at The Water Club, is designed with a spa experience* in mind. Inside to the left is a vanity with a large mirror, sink, and dimmable lighting. The lights get extremely hot, as a fair warning, but do the job well whether setting a mood or helping you get ready to go out. There are convenient shelves off the deck for storage of your goodies and the housekeeping extras the staff leaves for you. Bath products are by Lather, and feature a variety of flavors. Interesting enough but not outstanding compared to some of the wonderful products I’ve had at Aria and the new SLS recently. To the right is a true WC, with a standard height rider with mega flushing power. No phone, today that’s a good thing considering the lack of cleaning that takes place with most of them. Back to the action, the main piece of the bath is the shower. It’s a large enclosure, with an ample bench, gray stone accents, and a high shower head with a towel rack at the back. It steamed up well on a cold stormy night (more on that later) although I would prefer it had a rain head. That said it was one of the better hotel showers I’ve recently experienced. 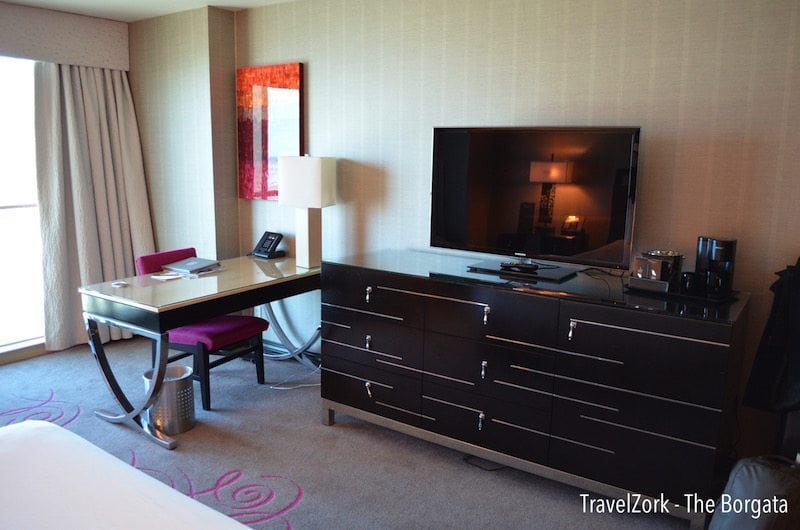 Exiting the bathroom we enter the room proper. Immediately inside the space I was struck by the two pieces of furniture you first encounter, the desk by the window, and the large buffet-style unit that holds the TV. The TV itself has the same type of interface as shown in my Water Club review, but customized for the Borgata. The interest however was really in the designers choice of mixing light and dark wood, often seen as a bad direction and a no no in the design field. And in most places it would be, but the Borgata is not most places, and the playfulness here works quite well. The unit itself has an interesting and well done metal inlay pattern that keeps it from fading into the wallpaper. On top of the unit by the LCD set is a coffee maker and some supplies for some in room entertainment. Nothing compared to the Water Club, but ample and basic. There’s also a concealed refrigerator (note: not minibar) in the unit as well as drawers, which is nice if you want to drag along your own goodies to keep cold in the room. Just past the entertainment unit is the desk, simple and clean, but outstanding not only because of the contrasting wood but also the pop of red in the chair and art above. The desk really doesn’t serve much otherwise unless you want to do some work, with a pen and paper, phone, and guide to the hotel. WiFi comes with a fee, a resort fee to be exact at $20 a night. Oh, and parking will be $5 unless you’re upper tier in the Borgata player’s club. The phone is nice, straightforward, with more than the usual quick dial buttons, and a clean profile. It was simple to order late night food in a drunken state, and therefore passes my muster. Just next to the desk across the room is a small armchair and table. It’s a nice place to sit and admire the room or view (more to come) and is adjacent to the room’s HVAC unit, which has a sensor much to my chagrin. It can be overridden, but I wish most hotels would allow us to use the facilities we pay for. But in the world of climate change, I guess it gets a pass. Behind the chair the window has curtains and sheers in muted tones which don’t clash against the view (again, more on that later) and help build the undertone of the design. To the left of the bed proper is the first nightstand, again clashing but playful light wood with a lamp with cut inlays and a box shade above. At this point this looks more like swap meet than intentional, but I’ll give it a pass. To the right is the other nightstand, larger and squat, the same tone as the entertainment center. Atop is another phone, same as on the desk, and the room service menu. I didn’t check the drawers for a Bible, even though I considered it one stormy night (seriously I’ll get to that, I promise.) But the main feature of the room is the bed. Set in the usual place, the bed features clean cool crisp white linens against dark wood and glass inlays in the headboard, with a shimmering silver striped bedskirt and black and white art and a round mirror rounding out the design of the room. There are plentiful pillows and plenty of room to keep warm on a cool stormy night (did I mention more about that later) in the king size bed. And it sleeps wonderfully cold and cozy, better than the slightly stiff beds at Revel and the Water Club’s bed which ran a tad too warm for my liking. The simple linens also made making sure the bed was clean and simple, and that’s always a welcome in this world of accidental or intentional bad housekeeping or even worse, bedbugs. (Yes, a bain on the northeastern US, and even here in Los Angeles now.) There is one thing I will say about the Borgata that really makes it amazing and special to me. Although the room screams Vegas, when you look out the room and see, as was my case, the marsh, windmills, and ocean beyond in the distance, you realize just what an accomplishment building a resort like this in a location like the Marina is an amazing feat. While I was there there was actually a massive storm one night, with howling wind and pouring rain. The tide surged in, making all of the land in the image above disappear into rippling waves and spinning windmills, and actually causing the building to rock back and forth with the wind. It was a night to remember for certain. But beyond that, the entire trip was a thing to remember. The storm made it memorable, but the hospitality and gaming, the design, and the entire package of “Vegas on the East Coast” was something that left me wanting more. And Borgata for its part has been after me, with amazing offers in a time when good offers from Vegas have dried up.

Would I say its for everyone? Actually yes. I think the Borgata offers locals as well as the seasoned gambler who travels the world a little bit of familiar with just enough twists and turns and local flair to make you rethink what Atlantic City has become and if there’s a way for a comeback. Because if everyone did what Borgata did, there may be a time in the future when Atlantic City regains a bit of the past success with just enough of the present atmosphere to mix it up. And that mix is something that helps make the Borgata something special in my book as well as those of my friends who have experienced it’s “Vegas” charm.

Other Atlantic City Hotel Reviews, or explore all the casino hotel reviews on TravelZork.

The Classic Room at the Borgata
The Water Club at Borgata
In Memoriam: The Revel Ocean Suite