As the 2016 Summer Travel Season began seasoned road warriors and newbie travelers were greeted with some of the worst TSA nightmares in recent history. One traveler (Sean H) filmed the security lines at Chicago Midway Airport two weeks before the Memorial Day weekend and the length of the line was beyond belief. The video has 2.37 million views and it winds through the hallways of Midway for a mind blowing 2 minutes and 19 seconds. The question on everybody’s mind was short and simple, “Why?” The TSA was called on the carpet before the US Congress and they explained that staffing levels have dropped from 47,000 to 44,900 while air travel has increased 15 percent. The TSA is part of the Department of Homeland Security and suffered through continual turnover in leadership, misconduct by senior managers, low staff morale and high turnover among their front line screening staff. The TSA also offered up a sacrificial lamb in the form of Kelly Hoggan and promised that they would work on improving things. The frequent flyer community responded with an exasperated sigh. (That’s the most polite way I can put it.) While the wait times in the TSA airport lines are long, they pale in comparison to how long it will take for the TSA to fix their systemic problems. Sure there is a subset of the travel community that belongs to the Pre-Check program, which offers a more streamlined method of processing, but the TSA has been funneling non Pre-Check members into the Pre-Check lines lately. Many of those people are selected in a seemingly random fashion and their lack of knowledge about how Pre-Check works (Hand your ID to the TSA staffer, put your boarding pass on the scanner, don’t take your shoes off, don’t take your toiletries out, don’t remove your computer, etc.) only serve to create a traffic jam and reduce the efficiency of the whole Pre-Check process.

Watching and experiencing this model of inefficiency and frustration tells me there has to be a better way. There is and the answer is CLEAR. CLEAR first appeared in the 2007-2008 time frame. The value proposition was simple. You applied for a CLEAR membership, provided a fair amount of background information and paid a fee of around $125. To activate and use the card, you went to the airport and stepped up to the CLEAR ATM-like kiosks where a CLEAR staffer helped you to electronically scan your fingerprints and the iris of your eye. There was a bit of paranoia about the fingerprint and iris gathering, but the advantage to be gained seemed to be worth the risk. From that point on, the airline security process became a thing of streamlined beauty. That sounds like I’m exaggerating but in comparison to the 30 – 45 – 60+ minute waits that were commonplace, security processing with CLEAR was like having a personal security concierge. I was watching CLEAR roll out across the USA and had registered with them so I could receive a notification once they started to serve my home airport ATL. Then in October of 2008 I got the following notice: 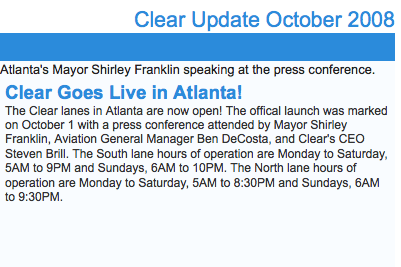 CLEAR Comes to Atlanta Notice From 2008

Once I received that notice I was ready to go. I sent in my money, went to the airport, submitted my fingerprints and iris scan and became an active member of the CLEAR community. My initial experiences with CLEAR were in Atlanta, New York – LaGuardia and Las Vegas, airports famous for their long security lines. The CLEAR process was everything they promised. CLEAR had dedicated lines. They had nicely dressed, cheerful staffers that helped you with the CLEAR kiosks if you were unfamiliar with the process. Once the CLEAR machine verified your identity, the CLEAR staffer walked you to the front of the line waiting to have their luggage scanned and once that was finished your were done. It was amazing. Wait times at LGA went from 60 minutes to 5 minutes at the most. It was pretty much airport nirvana.

Unfortunately, 2008 – 2009 were not good years for the travel industry. The implosion of the US mortgage industry, the stock market crash and near destruction of the economy saw overall travel expenditures to drop by more than 15 percent. All of the major airlines, airports and supporting vendors were affected. CLEAR was no exception. On June 23, 2009 CLEAR announced that they would cease operations. Not a good day for the frequent flyer community. We had lost a great provider and were all concerned about what would happen with our data. There were reassurances from CLEAR but the concerns remained.

In 2010, I received an email announcing that CLEAR was coming back. The old website at flyclear.com was no longer operative but CLEAR was reborn at www.clearme.com. The first two cities they would begin serving would be Denver and Orlando. Over the next 6 years I watched CLEAR expand to thirteen cities and Seattle, Washington is coming online soon. I’m glad to see CLEAR catching on and expanding. Former CLEAR members that had active memberships are grandfathered into the new CLEAR and they can reactivate their account to receive the balance of their membership term. New members pay $179 for a one year membership and family members can be added for $50. If you’re a Pre-Check member they can also cross reference your background information, streamlining the application process. CLEAR is also taking their security screening process model to stadiums and arenas servicing venues. In late April Delta announced that they were buying five percent of CLEAR and that Delta Diamond SkyMiles members would receive a free CLEAR membership. That announcement made me really sit up and take notice.

The big question is – With the TSA doing such a terrible job with airport security, is it time for them to step aside and gradually transition this job to CLEAR? CLEAR has proven that their business model and process works. Can it be scaled to work with the significantly larger number of travelers across the entire USA. I think the answer is a qualified yes. The automation that CLEAR has works. By expanding the number of kiosks significantly, they should be able to service larger numbers. Back end technical infrastructure can be scaled. The key will be in how they would choose to scale the people that serve on their front lines. If they can attract, train and retain staff that project the positive CLEAR experience, I think it would be “CLEAR” win for US travelers. For now, I’m waiting for CLEAR to come back to Atlanta.

More Travel Hacks?
Travel Hacks | Getting Started With Delta SkyMiles
How To Get The Cheapest Flights To Las Vegas
TripStreak | Search For Flights Based On Your Priorities