From the Green Parrot Bar we went back to the Blue Parrot Inn to regroup and watch the pouring rain from the porch. (Although the rain was unlucky overall, we did seem to get indoors by the time it was really coming down.) When the rain let up we walked to D.J.’s Clam Shack for dinner. Their famous lobster roll contained a generous portion of lobster but it was bland (I’m not all over lobster). My boyfriend had fish tacos and was less impressed than I was, though tacos are not really D.J’s specialty. 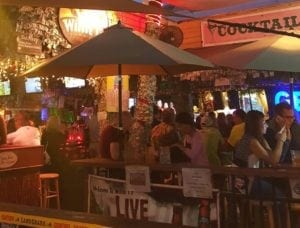 With full bellies, it was time to bar hop! I might get tired of walking up and down Duval Street if I wasn’t on vacation but there are more bars than you can hit in one trip. Many offer live music. First stop Rick’s. I prefer that my cocktails be delicious and a Caribbean Breeze was recommended and fit the bill. Then to The Lazy Gecko for the last few minutes of happy hour and a mandatory stop at The Smallest Bar Key West. It’s all about mingling in that small space! Sloppy Joe’s, Irish Kevin’s, Hog’s Breath and more are all down by Mallory Square, where there is a Sunset Celebration every night (you have to do it at least once). We settled in at Willie T’s for the remainder of the evening, to see Gerd Rube play. Willie T’s is not cheap, but they have live music all night. We ended our evening at Five Guys Burgers and Fries where saintly employees serve drunk people until they close at 10pm.

The next morning we had a relaxed breakfast at the pool and then got ourselves together and headed down Duval Street towards the Southernmost Point Buoy (the quieter side of Duval). While trying to confirm addresses for this article, I found this Google map helpful: Google Map of Key West. I wish I had looked at it while I was in Key West and compared it to the tourist maps that I had because we THOUGHT that we were heading towards Simonton Beach but we were actually heading toward South Beach. If you actually WANT to be heading towards the Southernmost Point, you’ll pass the Key West Butterfly and Nature Conservatory, which is worth a visit. You’ll also pass the Little Room Jazz Club which has live jazz every night and a daily 241 happy hour from 3pm to 8pm. We got all the way to South Beach and realized that Lagerheads Beach Bar is at the OTHER end of Simonton Street in-between the Historic Key West Seaport and Mallory Square. We got a lot of exercise. Once at Lagerheads Beach Bar we had their specialty, the fish tacos, but they were not as good as they were in February. They were a little light on the mango and the fish. This is a pleasant spot to spend the day and they often have live entertainment. It was still kind of overcast so we walked over to check out the Historic Key West Seaport, which we had completely overlooked in February. I got a piece of Key lime pie on a stick from the original Kermit’s (very good, though later I tried a regular slice of pie at the location on Duval and I think I prefer that). My boyfriend purchased a nice swordfish themed belt at Key West Bait & Tackle and went home with a souvenir that keeps his pants from falling down. We had dinner at Garbo’s Grill, which is a food truck parked in the courtyard of Grunt’s Bar and Grill. Food is cooked to order and you can purchase alcoholic beverages inside Grunt’s Bar. This trip was all about fish tacos and I hate to be critical of top rated spots, but although the tacos were filled with fish, it too was kind of bland and the unseasoned cabbage did not spice it up. In addition, the two small, thin taco shells were overflowing with fish and you really couldn’t pick them up. It would be better if the same amount of filling was put in three small taco shells or two bigger ones.

It was too overcast to see the sunset (which we missed anyway because we waited half an hour for our food) so we set out on another bar crawl. We hit Schooner Wharf Bar for the end of their 5pm-7pm happy hour. I’m glad we didn’t pay full price because the pina colada I had wasn’t very good but seeing the fisherman come into dock and clean their catch and throw the scraps to the huge tarpon in the water was pretty cool. The Schooner Wharf Bar is very old school Keysy and it was enjoyable to soak up that atmosphere and people watch. We walked over and stopped in for a drink at Two Friends Patio Restaurant and stayed for some karaoke but my $8.95 Keylime Colada was yucky so we left. Boyfriend bought a can of beer out of a cooler in front of a gift shop on Duval so he could make it to the next bar! We stopped into Willie T’s again for a little while before getting lured into Pinchers by patrons at the bar and lounge on the first floor. We joined in on cajoling anybody that walked by to come in for 241 well drinks. They had to give us a reason NOT to come in. Soon there were 30 people calling out for additional people to come join in on drinking and dancing to live music. It was so much fun that night, but not so much in the morning.