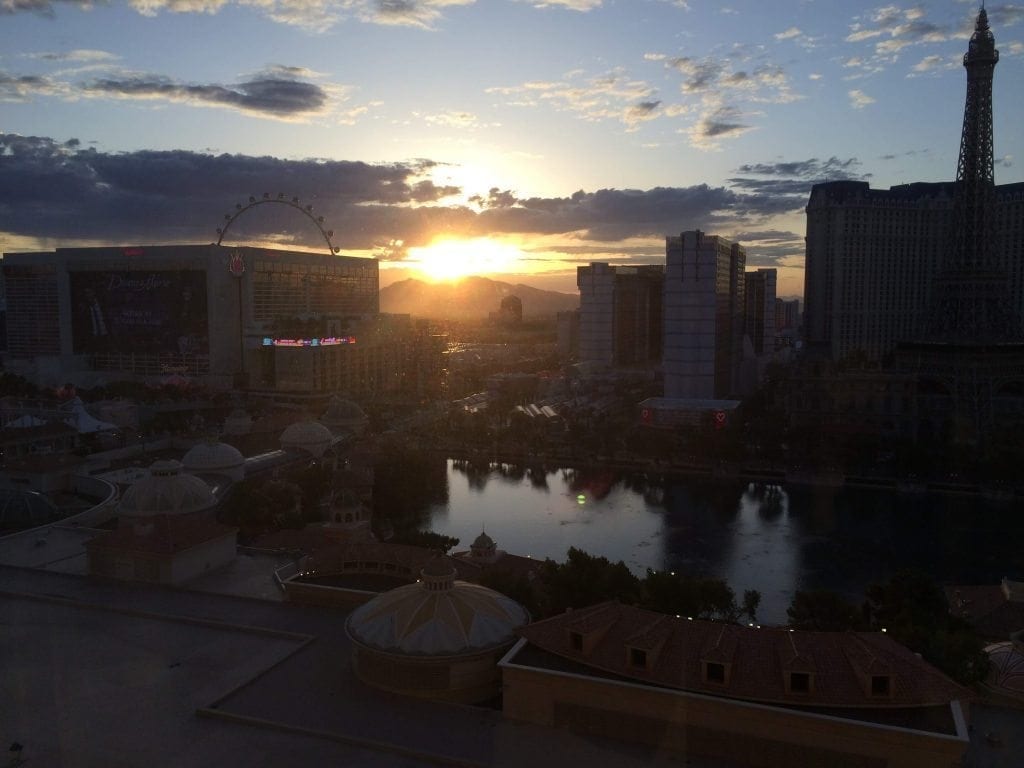 After an actual full night’s sleep, we were finally adjusted to Vegas time. Good thing since we head home tomorrow. DAMN. IT.

Vegas…at this moment…is shiny. It’s people, however, are not. Let’s count the hookers! Oh hello, ma’am. No, I don’t need company. Yes, I’m sure. Oh hello other ma’am. Yes, I called you ma’am. I’m from Texas. …oh ha ha, an “everything’s bigger in Texas” pun…go away! Shoo!

I was holding my own on some video poker. I needed coffee. I had to walk all the way across the casino to Snacks to get coffee. I set it down by a slot machine and walked about ohhhhh 20 yards to the bill changer…broke a hundy. Walked back. Coffee gone. Back to Snacks…he gave me another coffee free of charge. I did not leave my coffee unattended this time.

Sat down to enjoy coffee. Sit on the end of a row of slots…looking down at the shopping promenade at Bellagio… and I see a ball of sparkle coming my way. It meanders from one side of the walkway to the other…floating…Glinda? …Glinda gets closer…Glinda runs into a large flower display in the middle of the walkway. She backs up and looks mad at the flowers…like, how dare you exist here in the middle of my nonsensical ever-winding path! Uh oh…Glinda has made it into the casino. I see she’s about 6 feet tall and a bit more curvaceous. Her dress is covered in rainbow sequins and appears to be tucked into an undergarment right around her stomach area on the left side of her body. She has on one barrette. This is easily noticed because the remainder of her bleached blonde hair is matted to her cheek…and her over-mascara’d eyelash…which is sorta half-on half-off…the eyelash I mean.

Here she comes…I sip my coffee while never taking my eyes off of her…oh good, she’s heading left…wait no, riiiiiiight…nope…back left…*pause* k girl, take off one heel. Looks mad at heel. Now walking on one heel she clearly has a directional bias and it is toward me. I surreptitiously slide my coffee away from my body and for some reason hold on to my wallet in my pocket. I brace myself as if for a huge wave. Left…riiiiiight…leffffft…and BOOM. Glinda falls on my machine. Of course, as I see the wave of Glinda falling in slow motion, like any Southern gentleman, I move out of the way. She falls into my chair and GLARES at me…and then it becomes confusion…and then she puts her head down on her crossed arms and starts crying. THAT’S MY CUE! SECURITY! Luckily, a server was evidently watching this with me and rushed over with a “oh honey, what happened?”   …wait for it…

Concerned (nosy) I am standing behind the server as I hear Glinda sob… “I lost my shoe…” ——– Oh, honey…no, it’s right here in your hand.

I had to walk away quickly because I was about to spit out my coffee I was laughing so hard.

I saw the server about 30 minutes later and asked about Glinda…she said that she had been at Drai’s and was staying at The Cromwell…she was just trying to get to her room. We looked at each other in a knowing smirk…poor Glinda. Lucky me for that story!

Rest of the day…Lunch at PBR Rock Bar at P-Ho using a Groupon I’d acquired for $12 using a promo…4 for lunch or dinner for $80. Service was good. Food was surprisingly good. Environment was fun if not a bit loud. $20 each couple including tip. Good location. Recommended.

Dinner at Noodles before the J-Lo show. This place was actually surprisingly good as well. Service, however, was not only NOT awesome, it was kinda snippy and rude. I think that might be attributed to cultural differences…but SMILE AT ME. PLEASE!!! SMILE AT ME! I also don’t get the Dim Sum cart… I feel like I’m getting sold a used car…HARD. Except the used car is chicken feet…and the salesperson is MEAN AND DOESN’T SMILE. We went to J-Lo. The super douche-y couple behind us clearly thought they were awesome…in her short white dress and his tailored (from Ross) slim fit bro suit…sitting in the 3rd row from the back. Ballin’. Hey, we were there too, but I know I paid for the cheap(-er) seats on purpose. REGARDLESS, the bro, who we’ll call Ross, said “Stand up! We’re at a concert!” when the show started. No, you’re at a show in Vegas…concerts have singing…sometimes. We’re here for the booty. Well they stood up. Couple behind them gets pissed. Shouting back and forth. This happens a number of times. People do indeed stand for “Jenny From the Block” (as you should…respect…don’t be fooled by the rocks that she got). But in general, no, sit your ass down. Security comes over and gives him a “one more time and you’re out”. He proceeds to m*thaf*cka this and m*thaf*cka that the rest of the show. But she-bro calms him down by patting his chest via his one-button-unlatched-too-many athletic slim fit bro shirt.

BUT THEY WERE NOTHING.

Now, no offense to Alabama, but the folks from your state to our left (we had aisle seats) were celebrating little ho-ey Gina Belle’s 21st birthday and wanted to take selfies during the show and be woo-girls (don’t know it? Watch this video) …even the boys…and especially the mom… the mom in all her don’t-wear-that-you’re-too-old GLORY…who was trying to be her once upon a time 19 year old Ole Miss sorority girl friendly-with-the-boys self…but instead had the bladder of her ACTUAL 50 (60?) year old self… and kept getting up and stumbling over the two people to our left, my wife, and then would place her GRUBBY SUN-SCORTCHED LIVER-SPOTTED HAND on MY knee to balance her Spanx-enhanced figure somehow contained within a size 8 day glo Yellow slip dress (that she found in the Juniors section…at the Macy’s…as in “Gina Belle! Let’s go THE MACY’S and find us some fun matchin’ dresses! For Vegas! Wooooo!) – after the third time that she stumbled on by and I saw that hand coming for my knee…I moved it. I moved my knee and she stumbled out into the aisle. What’s funny is that she did it again…traipsed on down the aisle…hand…moved knee…stumble. I got up near the end of the show and told the security guard I was being sexually harassed. When Gina Belle’s mama came back in during the last number, she gave her a warning.  I hope it was “stop sexually harassing that nice man who keeps moving his knee in hopes that you face plant”.

As we left I heard her tell Gina Belle, “don’t be too easy!” – this coming from the woman who I can only imagine spent that night in maybe only slightly better graceful form than Glinda using an opening line of “you want some of the yella?” (…yellow dayglo, remember? It’s funny.)

The show was good…not great but good. Won’t go again. J-Lo in a tent SLAUGHTERING “I Hope You Dance” was traumatizing. It was for her children. Does she hate the children? Methinks so. SO, Friday was turning out to be an epic day with the people of Vegas…so why end it? We met the newbs in their Cosmo room to pre-game drink and take pictures with Vegas on a Friday night as the backdrop from their beautiful terrace. I shot a RedBull…what? I can bro it up when necessary. It was 11:30 pm. And like anyone not from the West Coast in Vegas, I had that moment where I said to myself, “self, it’s 1:30 am back home and you’re 40 years old” – and then proceeded to Uber on over to Wynncore (in an Escalade, mind you…yee haw! F’ you cabbies! I might have yelled that out the window once…or twice) — we played various games using a group fund and had 8 rounds of drinks…Makers…Makers…Makers…lots and lots of Makers… it was SO MUCH FUN.

Ended up back in the room around 4 am…thankfully, I was smart enough to 1) pay for early bird check-in and 2) book a 1 pm flight. Limo shows up promptly…hurry on over to the airport for expected super long TSA lines…and no one is in line. Eat a sammich. Board plane. Head home. And Vegas is over. Arriving in Houston is sad. It’s humid. It smells like poo. But it’s home. Still, arriving in Houston after Vegas is dire levels of sad… I have a busy summer for work, but my reward is a four day trip with BFF, Emily, in September. WE WILL GET INTO TROUBLE.

I’ll probably gamble before then…if so, you know you’ll be along for the ride.

My other trip reports and narratives :
It’s Not Vegas, it’s me…or is it Vegas?
Lake Charles | Comparison Of The Golden Nugget And Pinnacle’s L’Auberge
Biloxi | Beau in the Rain…Bees on the Plane
Introducing VegasIntrovert | Honest, Real and Sometimes Funny!