Mini-performance water feature in the lagoon in front of the Esplanade entrance.

Despite the pushback of Wynn Palace, Wynn continues to tinker and change up his Las Vegas properties in line with his recent public announcements regarding several major changes to the properties, including the as yet not dated but forthcoming Wynn Paradise Park.

During a recent stay at Encore, whose renovated rooms I’ll be covering in an upcoming article, I wandered about the property observing yet more changes that have come about since my last report on Steve’s tweaks, closings, and moves. And as before, this trip did not disappoint (well, in some ways it did) in providing yet more physical evidence of the changes already in motion for the property. (Note : previous TravelZork review of Encore Salon Suite.)

On the Encore side, the first thing noticed was that the iconic red chandeliers, one of the casino’s signature elements, are gone. The clerk, looking somewhat off at my bewildered face, smiled and said they were gone for cleaning, but each has been replaced with a single downlight. I hope they return quickly, because the casino feels out of character without their red glow against all the cream elements elsewhere. Also on the Encore side, Wynn’s reuse of Society and Southside Bar has been completed, with the space having been made over into a new poker room. The room is modern in aesthetic, similar to Andreas, but with the same color scheme as the Encore Players Club in shades of blue and white with a beautiful mosaic set of a set of Aces for hole cards. The room was packed during the afternoon, a good use of the space perhaps over the somewhat empty at times Society, and also contains a mini-sports book, something Encore has been missing aside from a fairly useless kiosk since opening. It’s a change that’s yet another nod to Encore’s shift from ultra-luxury to the crowd it now caters to.

On the Wynn side, there’s little inside to report. Tulips, the rather naughty looking sculpture by pop-artist Jeff Koons has been moved from its home and replaced by the Popeye sculpture formerly in the Esplanade. Tryst’s replacement, Intrigue, has also opened, and although I didn’t venture down towards the space itself, it seems to be doing very well according to word of mouth. 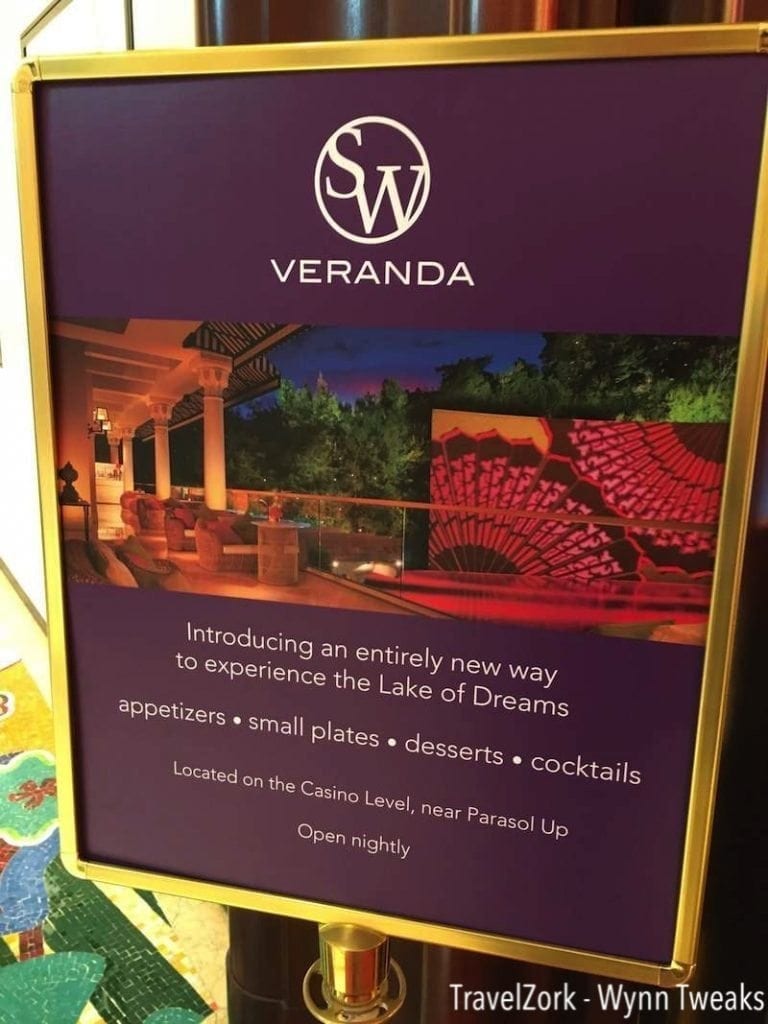 Also new is the SW Veranda, a repurposing of the former South Show Terrace at the Lake of Dreams into an extension of SW restaurant, featuring a limited menu and bar service overlooking the show from above. It’s a useful reuse of space that was almost always closed, and although I didn’t get to sample it, I look forward to in the future to see how it compares to the steakhouse itself. And rounding out the changes, perhaps the most well known already and visible from the strip itself, is the addition of a mini-performance water feature in the lagoon in front of the Esplanade entrance at the corner of Spring Mountain and Las Vegas Boulevard. The feature, unlike others, is colorful, and plays music nearly non-stop with no set times. It’s a fun addition that will draw crowds into the Esplanade, although with some songs from “Beauty and the Beast” it’s unclear how people will fare with the stroller rules on property.

All in all, the upgrades and Wynn Las Vegas Property Changes are better for the user, and worse in some ways for those of us who loved what the properties were, as we’ll get to in my upcoming review. But for better or worse the evidence is clear, Wynn has no intention of letting Wynn and Encore languish, especially as he wraps up the new crown jewel of his collection.