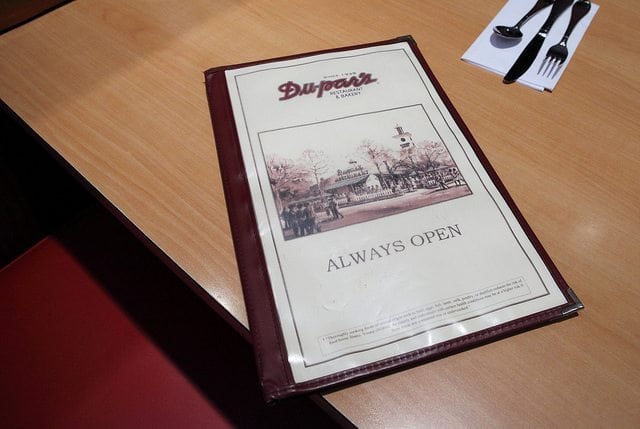 DuPar’s Restaurant and Bakery at The Golden Gate Hotel and Casino abruptly closed for good last night. This small west coast bakery and restaurant chain has the best pancakes that I’ve ever eaten. Thankfully the pancake recipe hasn’t entirely left Las Vegas. The DuPar’s restaurant and bakery location at the Suncoast casino is still open.

Here’s the official press release from the Golden Gate about DuPar’s closing:

LAS VEGAS – Due to financial reasons, Du-Par’s Restaurant & Bakery at Golden Gate Hotel & Casino in Downtown Las Vegas will close February 8 at midnight. A leased tenant of the historic hotel, Du-Par’s had struggled with payments over an extended period of time.

While the restaurant will be closed for the time being, Golden Gate is currently evaluating future opportunities for the space.

While the pancakes are the only reason I’ve eaten at DuPar’s the restaurant is famous for a different, non-bakery, recipe. The second dish that DuPar’s at the Golden Gate was famous for was the shrimp cocktail. However, unlike all the baked good, they don’t own the recipe to make the infamous shrimp cocktail.

According to the owner of the Golden Gate, Derek Stevens, the casino owns the shrimp cocktail recipe. It’s currently locked away and should return in the future. This closure seems somewhat abrupt and the Golden Gate isn’t ready to announce a new restaurant. My initial guess is that the new restaurant will be a similar 24-hour cafe since this is the only restaurant at the Golden Gate.

In the meantime, I’m going to figure out how to free up some time to get some of those beautiful, fluffy, covered in drawn butter, and delicious pancakes at the Suncoast. Update: I’m told that Golden Gate will not be building a restaurant. The expansion will add “infrastructure” for the casino.