When writing for my previous employer (an amazing opportunity I will never regret or forget) I was fortunate enough to be part of the opening and media tours prior to of two properties that have become landmarks on the modern Las Vegas strip. When Aria opened, I toured the property the night before…casino empty, tables stacked with crisp clean chips waiting for patrons. It was an eery sight, a virgin property ready for what would come. The second property I had the privilege of touring prior to opening and then staying in multiple times was one that has become a bit of a hot spot for both the bad and the good, the Cosmopolitan of Las Vegas. (An Autograph Collection property which can be reserved on the Marriott website.)  The property, with its over the top casino design by David Rockwell, and understated suite design, composes some of the most varied room selections on the strip, an amazing array of restaurants, art installations, clubs, and pools all squeezed onto a property that by Vegas standards in size would be considered a postage stamp. But despite these challenges, the Cosmo has thrived, charging rates in line with Wynn, Encore and Bellagio, and always keeping full, despite incidents of overcrowding, failures in consistent guest experiences, and even accidents like the recent fire that damaged a portion of it’s spa-level Bamboo pool. And it is because of that fire that I remember what is perhaps one of my most enjoyed rooms at the Cosmopolitan and one I had the privilege of enjoying for a weekend, the Lanai Suite. Situated on the 14th floor of the West End Tower, the Lanais are something of a hidden gem in the Cosmopolitan. Taking the elevator to the spa and pool level, at one end of the hallway is the entry to the Spa and Salon, and to the other is a discreet set of double doors. Through these doors is a private hideaway, with dark wood doors, mirrors on the walls, and lighted numbers indicated just how few of these rooms there are. And there’s a reason for the limitation. The lanais are designed in such a way to have a feel not only of a high end room, but a bit of a retreat in the form of an urban apartment. And that means that they have to be located in a place that allows for them to exploit the design and amenities that they accentuate, the location on the spa level, and the access to the adjacent Bamboo Pool. My chance to stay in one of these luxury suites came due to a great deal via Identity, the Cosmopolitan’s players club, when they were trying to lure my gaming dollars away from MGM. For roughly the cost of a small suite at Aria, they would give me the Lanai for the weekend. I jumped at the chance. Check in was courteous and kind, and I was quickly up to the 14th floor, down the hall, and into our new home for the next 72 hours. RFID key waved, inside we went, and beyond that door was something totally unexpected considering the relatively laid back design of the Cosmo’s room’s in general. Just inside the suite, there’s an immediate wall of mirrors similar to those accenting the hallway, bezeled, smoky, and in a running bond pattern. It’s over the top, but just enough, like I thought the rooms should have been in general as opposed to Rockwell’s diluted version of design used overall. The room’s doors are stark white, with black frames, and dark earthy wallpaper leads to an intimate low feel despite the obvious size of the suite from even the entry. Oddly there are no electronic DND signs here, and a door hanging wooden sign is what suffices like those on the rest of the property. Just to the right of the main door is a 3/4 bath. The dark wallpaper of the entry carries over into the space, with bright limestone tile floors and silver and porcelain fixtures. All amenities are the resort wide Bigelow brand, although in these suites they are oversized bottles, including lip balm, toothbrushes, and full size tubes of toothpaste as well. The shower is a full size walk in, clad in limestone, with an oversized shower head. Perfect for those who are in and out of the suite and secondary guests you might not want sharing the master bath. Just beyond the entry, following the mirrored wall, we enter the dining/kitchen portion of the suite. To the back of the room is a kitchenette, albeit a bit less stocked than some of the other rooms which were previously going to be sold as condos and therefore have full kitchen appliances. There is a full sink, microwave, and glassware for entertaining. Missing is a separate fridge, which would be nice considering the cost of the suite per night typically. 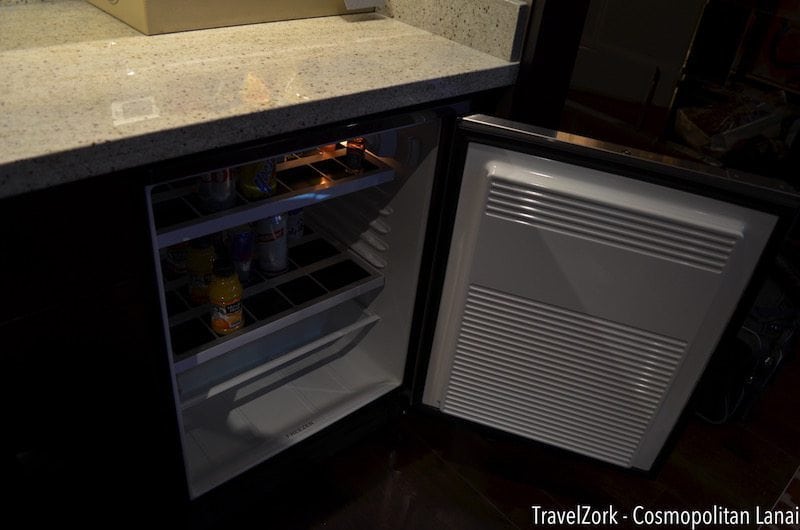 Our minibar, as you can see, was also half full, another incident of failing housekeeping services at the hotel that’s been a plague since day one. Above, disheveled but slightly more filled, is a tray of non-refrigerated goods for enjoyment, including the signature binoculars, a bygone of the “curious class” intro the property put out to the world. The Caesarstone counters and dark cabinets are another example of stark contrast in the room, and provide ample space for entertaining. Just in front of the kitchenette is a dining table, or nook, or something. I wasn’t quite sure what to make of this piece, as it was overall quite odd in its design and execution. In lieu of a traditional table, there’s an elevated surface with high banquette at the rear, and four bar stools around the rest of the bar height table. In the center of the table, under a dimmable box shade lamp and in front of a back wall of gray mosaic-like wallpaper, is a white accent bowl. It gets lost in the white table top, but is a nice addition nonetheless. The stools were not particularly comfortable unfortunately, and we chose to use the banquette for seating, for more than one reason. That reason being that the dining area had a separate wall-mounted flat screen for watching whatever you want on the TV, and although as you’ll see shortly it’s very close to another wall mounted TV, it allowed my suite mate to watch football while he ate dinner while I chose to sit in an adjacent room and watch the news. Also located on the wall is a series of switches to control lighting, shades, and scenes throughout the room. As you’ll see later, all of this is centrally controlled by a larger scale system, but in a pinch these switches helped to take care of the problem that finding the operating panel might have caused. Just beyond the dining area is the main living area, a 2 story space which, despite the darkness of my pictures, is awash in natural light from the floor to ceiling windows. On the wall, adjacent to art, is a built in unit with shelving, LED candles for use to set the mood if you desire, various art objects, the hotel’s signature Phaidon books (for sale if you want!) and information on the hotel such as room service and the like. Here is also the secondary TV, which like all the others links into the Cosmo’s central interface, although at the time of my stay it had not been updated to the more simplified v2 that was later implemented. Adjacent to the TV and stair to the loft above is a two sided couch, deep brown with a ton of throw pillows in red, brown and white cheetah print, with a faux alligator-skin ottoman in the middle. It made for a nice place to crash and catch some TV before bed, although I questioned the ability to keep all it’s nooks and crannies clean. I am somewhat afraid of Cosmo’s housekeeping in general for more than one reason.

But that’s just the beginning of the real treats that come with the Lanai suite, things that I didn’t even expect of know would come with our stay. The Lanai proved to be one of the most intriguing rooms I’ve ever stayed in, and when we continue our review in the second part, you’ll see just why these rooms are worth the extra money for the seclusion and access the true casino guest really desires.