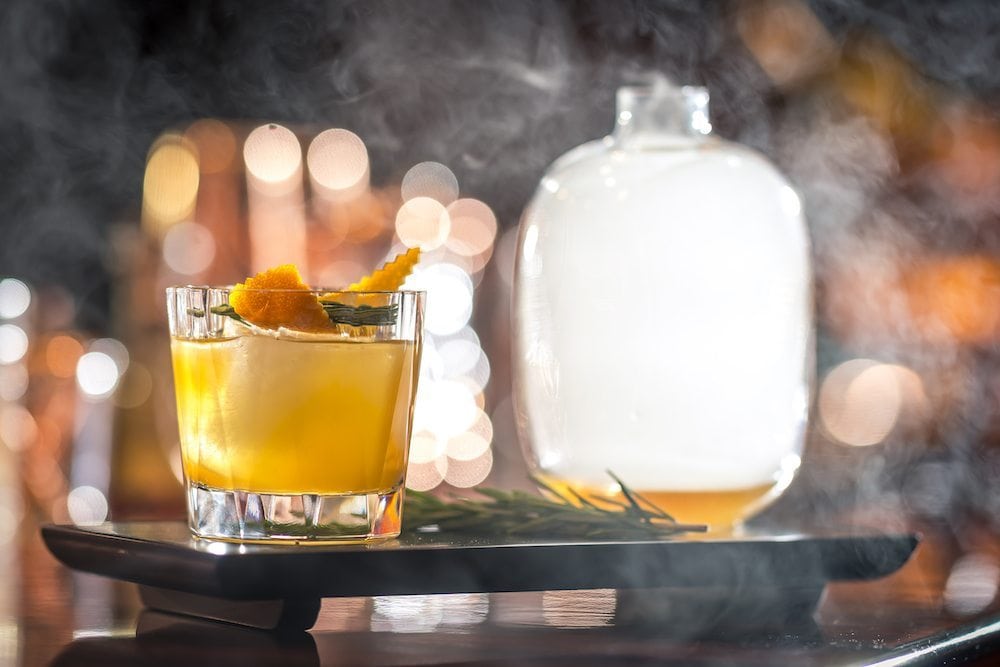 Hotel bar. The two words evoke the image of a darkly lit bar with disheveled businesspeople shaking the ice in their glasses as they dream of being home. But as hotel chains rapidly work to give properties and brands their own character while luring customers back from boutiques, that spirit is moving to the bar. Among the efforts, a feature that literally goes to the top: bee cultivation on the hotel roof.

The bees are not just part of an environmental initiative at InterContinental New York Times Square Hotel in Midtown Manhattan. They are inspiration for a concept called Stinger by James Beard Award-winning celebrity chef Todd English that opened at the end of 2016. Moving away from a hotel bar feel, the chic Stinger is accessible from a street entrance in addition to the lobby. The hotel interior is only visible at one end. The decor has a modern woodsy feel. During the chilly seasons, a big fireplace offers a comfortable respite from the nasty winds that sneak around skyscrapers.

Buzz is a great word to describe Stinger for a few reasons. A. The obvious: bees. B. The place is packed and everyone seems to be having a good time. C. The unique and powerful cocktails themselves that are cultivated by top mixologist Francesco Lafranconi. While a full bar is offered, the signature cocktail list cannot be missed. The menu offers house-cultivated recipes in addition to spins on traditional offerings.

The one drink that will capture all of the buzz is the Smokin’ Sipper. The drink is delivered in a jar filled with smoke on top of the serum. A server gently pours the cocktail on the rocks in a tumbler, but leaves some of the liquid to marinate in the smoke for (an awkward) second pour by the customer. The smoke enhances the heavy flavor of the bourbon while the orgeat syrup softens the bite with some sweetness. The rosemary infused vermouth balances out the drink with a hint of botanical. This is a drink for those who can’t get enough smokey flavor. Otherwise, it may be a little overwhelming.

Variety is another plus about Stinger. Cocktails are offered in sizes ranging from a two-ounce taste to shareable bowls that serve up to eight guests. Expect New York prices at Stinger. The two-ounce drinks will set you back $9 and the biggest bowls serve eight people for $96. Taking a little pain from the sting to your wallet is the ability to earn reward points. Guests may charge their check to the room, which, in turn, earns 10 IHG Rewards points for every dollar spent excluding taxes. Points are also redeemable for food and drink at the bar.

Stinger offers food by English. The cuisine is an elevated take on bar food that weaves in some of the rooftop honey as a condiment for the cheese plates. The casual concept offers lighter bites such as a mezze and avocado toasts, but a few substantial offerings like smoked ribs and sliders are available. Desserts include a local nod with the New York style cheesecake. Stinger is in good BosWash company. Fairmont Washington, D.C., Georgetown has a rooftop bee program as well. The honey is incorporated into menus at the Lobby Bar. The cocktail menu is clever. It has “revivals” and “classic” cocktails. The old favorites are all made with high-quality ingredients and do not cut corners (think lime juice and Cointreau instead of sweet and sour mix), which makes them really good.

Two seasonal cocktails focus on honey from the rooftop bees. The offerings as of April 2017 are the Beetini, which has vodka, elderflower liqueur, honey syrup, lemon and bitters. It is a great spring and summertime drink with the freshness of the lemon and sweetness of the liqueur and honey syrup. The other cocktail is a whiskey-based Honey Rye Buzz. Note that the properties tend to incorporate the cultivated honey into syrups both for flavor purposes and to last longer. Fairmont tells TravelZork that its bees harvest hundreds of pounds of honey in the summer and fall. Some of it is frozen for when it is needed throughout the year. Drinks are slightly more affordable in D.C. at $15 and $16 respectively for the martinis.

The lobby, Lobby Bar and guest rooms at Fairmont, D.C., Georgetown recently went through a $27 million renovation. Weather permitting, there is a beautiful courtyard. If it is not open, politely ask the staff to sit outside and you will likely be accommodated… the service you would expect from the hotel group. The Lobby Bar does not allow for earning in the President’s Club loyalty program. Boston also has its own bee hotel guests. Taj Boston’s roof has a hive and cultivates its own honey. The honey is incorporated into menu items, such as a cake and signature cocktail with honey that changes seasonally. Taj operates the InnerCircle Guest Recognition Programme for loyalty.

These bee programs date back to 2009 when Fairmont formally announced its initiative. The group says 105,000 Italian honey bees were introduced across three hives in the rooftop garden. The move was a response to an ongoing national honeybee shortage. Taj Boston announced its program in 2013. The property’s director of engineering told Boston Magazine that the bees pollinate in the Boston Garden, which is across the street, and nearby rooftop gardens. At the InterContinental New York Times Square, the hive installed in 2012 is one of several environmental initiatives for the LEED-certified property. A portion of the proceeds from its Bee Good cocktail goes to The Best Bees Company and Urban Bee Keeping Laboratory & Bee Sanctuary, Inc., which is a nonprofit organization that funds bee health, development and education.

Last year the United Nations warned that many species of bees and other pollinators are headed toward extinction, which could affect the world’s food supply. But the specific cause of the die-outs is unknown. Every sip of a honey-based cocktail from hotel rooftop bees is part of a much larger effort to help the planet.